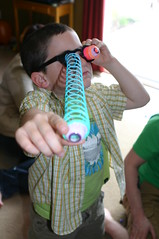 I live with three children. I’ve never really lived with children before unless you consider the boys at apartment 109 children. The oldest boy, middle child, Lucas Goodyear, who is six years old, has his own blog and loves to sing songs. When I watch Lucas interact with people, with music and with the world around him I can’t help but want to be more like he is. He does everything with all the energy he can muster. He asks real genuine questions; like today when he asked his dad if he was the captain of the church. Oh to not be tainted by culture and church, to go back to when we were innocent and everything was simple.

For example, Lucas loves to sing. Lucas loves to sing Nickleback, Weezer, Supertones and other bands that have hit songs. When Lucas sings he belts it out from everything he is and wants to perform for everyone, or no one. He’ll do it by himself the same way he will do it when everyone is watching. He doesn’t back down with an audience. One day though Lucas is going to lose this gift of not caring. We all have lost it. I want to find it again. 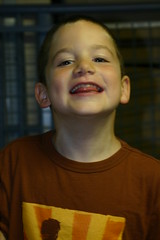 Another example, Lucas loves to dance. If you saw Lucas dance you would think he is crazy and maybe even a bit possessed. But Lucas doesn’t care what you think. Lucas dances because he loves to dance and he puts absolutely every part of his body into it. With clenched fists and sometimes closed eyes he just moves.

Eventually Lucas is going to lose this, we all do, and then he will look at kids around six years old and wonder why he cares so much and why he can’t care so little like them. Then he will try to find it again. I am tring to find it again. I’m trying not to allow other people’s perceptions of me dictate how I feel or act. I’m trying to rid of the curse that has been put on us all to please other people and be validated by the, I am glad to be Lucas’ “superfriend forever and ever.” Hopefully by spending time with him I’ll learn how to be more like him.

5 thoughts on “I Want To Be More Like Lucas Goodyear”