Back from New Orleans | Nathan Colquhoun 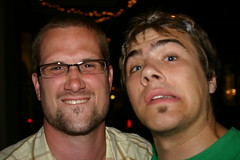 Well we are officially back from New Orleans. I only posted once while we were there, partly because I came back to the hotel completely exhausted every night and was way to tired to go connect to the net and we had a panel interview night tonight at the FRWY (and also showed this video that Kevin threw together) so we saved our stories to share there before we blogged them.

I am just going to go through some of the more poignant parts of the trip and post some pics as well.

Spending over 42 hours in a car with Melissa, Kevin, Kristyn and Pernell was wonderful. We spent most of those hours keeping each other awake with out music tastes. Most of them were angry at me for most of the trip because I can fall asleep so quick and slept a good portion of those hours. I love playing games, so I played the game of ‘guess how long the white lane lines are in the middle of the highway.’ I heard from my good friend Nathan Shurr that they were around 12 feet, but I had a hard time believing him. For the sake of the game I decided to try to convince everyone that they were that long. No one believed me and Pernell guessed even 2-3 feet. So I was so excited so I pulled over in the middle of the highway and laid next to the line on the highway and I, being 6 feet, was only half the line. Who would have thought?

(driving into New Orleans, stopped to I could pee) 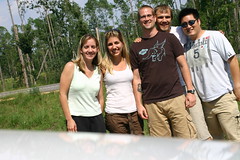 It turns out that it costs a family anywhere between $5000-8000 to have their house gutted. Gutting means removing absolutely everything from the house, drywall, excess nails, baseboards, all belongings and electronics and bring the house back to the stage where all that remains is the studs and the ceiling. It is a long and gruelling process, we usually had anywhere from 10-15 people working with us in our crew and it took two full days to finish a house. We worked on two houses completely and finished up one other house for a group that was there before us. So we saved a few families a lot of money, money that they probably wouldn’t have been able to afford which would in return leave them displaced from their homes even longer. This was the bulk of our work there, and I think it was a great opportunity to help even though it seemed a bit insignificant in light of how much work still needs to happen. They still have over 1600 houses on their gutting list and are expecting all kinds more as the deadline to get their houses on the list approaches. This will still take years and years. 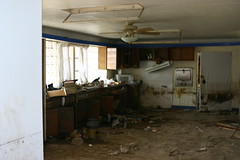 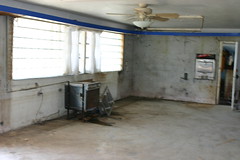 (first pile of many all from inside the house) 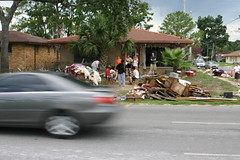 On our second last night there, we drove through the ninth ward, which is the poorest neighbourhood in New Orleans. I have honestly never seen so much destruction in my life. I thought I had seen it all watching gory tv shoes and 24, but this was ridiculous. There was complete neighbourhoods utterly destroyed with no remains visible anywhere from where the house is now. Other houses were capsized or picked up and moved on their side or on top of cars. As soon as we pulled into the area we realized quickly that it was desolate; no one lived here anymore. There was one man who stopped our car and asked us for water, we didn’t have any so we drove to the local store to grab some for him. I’ve never seen a man rip into a gift to quickly before, I’ve never seen such wide eyes for something that I have never not had access to. The ninth ward was the saddest thing I had ever seen. From babies toys scattered across yards and personal belonging still stuck in trees everything that we saw was just overwhelming. We walked through the area for a few hours and just tried to take it in. We have no idea who these people are or where they are now but I’m sure their stories are fascinating and I knew that they needed as much help as we could give them. We met one guy that was stopping in to look at his house and he was stuck during the flood for three days on his rooftop without food or water and his mother died in the storm. Yet he never complained, or got upset with what happened and told us that he was blessed to be alive. Oh to have that sort of perspective on life. 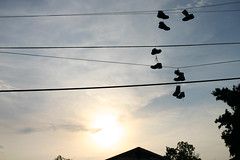 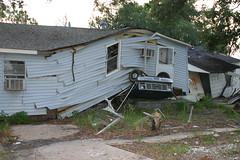 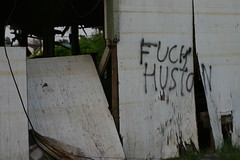 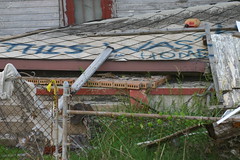 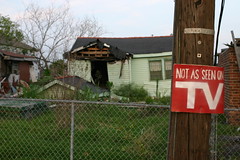 I think you realize really quickly when you get there that the separation between poor and rich are quite larger than we probably would expect. In a lot of places you would see one house completely fixed, with new sod for their lawn and everything of their house in working order while the house next to them was barren full of mold and debris. The rich neighbourhoods were all fixed up, along with the tourist sections while the poor neighbourhoods were left as is and will probably eventually just be demolished. The organization Acorn that we were with did their best to help these families that were in need and did what they could to help get them ready for the rebuilding process. They were an awesome organization with staff that were a pleasure to get to know. If you ever go down there I would recommend going with them right away because of the way that they are helping make a dent in the process there.

(director of the New Orleans office) 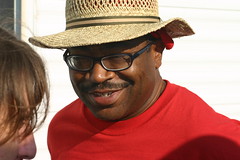 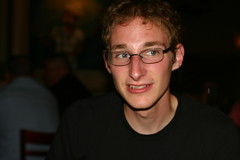 While we were there we also worked with a number of others from all over the States that were there, mostly on their own, to help rebuild also. Our ‘American friends’ were a great to have around and get to know and share these stories with. They are also great workers who worked hard until the job was done and were awesome to get to know and spend time with. Ted, Shawn, Randy, Mary…thank-you for your hearts and your desire be of help, you truly are a beautiful picture of the life that Jesus lived, helping those in need especially using your own time and energy to do so. 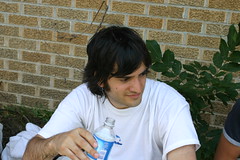 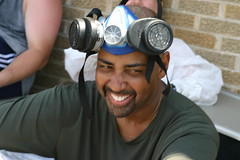 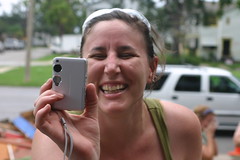 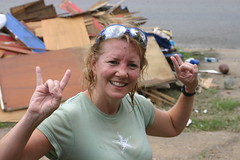 Thank-you to Kevin and Kristyn for lending me their IPods during the working hours. We all had gas masks on which aren’t very helpful for working conversation and having the wonderful music ringing in my ears helped me work so much better. Thank-you to Melissa for making me feel like a comedian by laughing at all my jokes and also for being fearless in befriending the people around you and asking them of their stories. Thank-you Pernell for the van, your butt sweat, insults and your heart for the urban poor, you encouraged us all while we were there and kept our focus off of ourselves. Thank-you Kevin for slideshow of pictures and your sincere heart that taught us all how to try and feel what others were feeling. Thank-you Kristyn for organizing this whole trip, for the great talks about trying to live ethically and for making Kevin laugh so hard his leg cramped.

Overall the trip was amazing. I am thrilled that I go to go and help even a few families there make the best of their situation. It really opened my eyes to the world around me, how the media focuses on only certain things, how people really can be content with nothing and what it means to serve with a community of people around you. Hopefully this will only increase my heart for the broken, needy, misdirected and destroyed and will help me focus on how I can help continue to change the places that I go from here on in.