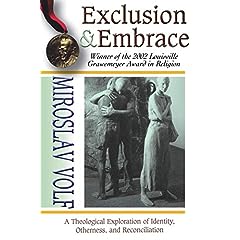 Apparently Rachel’s family goes to bed earlier than I expected on vacation (I guess two hours of sleep stuffed in a car doesn’t equal a good nights sleep). And I also discovered that way up here on Manitoulin Island, there is internet access; high speed was even just made available. I made it a goal to get through Miroslav Volf’s book Exclusion and Embrace. I book that I’ve had in my possession for a year now and haven’t been able to read it. The intensity of the material and sheer laziness both added to the delay.
My previous post on systems, and whether or not going through the government and trying to change the systems was something that Volf approached right into the book.

“theologians should concentrate less on social arrangements and more on fostering the kind of social agents capable of envisioning and creating just, truthful, and peaceful societies, and on shaping a cultural climate in which such agents will thrive.”

Thank-you Volf, that is almost identical to my question. I think however though I approached it on a more practical way. I wasn’t talking about theologians and what they should do, I was talking about me, and what I should do. Maybe focusing on people, individuals and helping them think more like Jesus; more just, truthful and peaceful is the way to go instead of trying to make entire systems that way. At least that seems more the way of Jesus; slow, inefficient but remarkably humbling and effective. Afterall, we are believer of a faith system that was started by twelve no-names and a homeless guy that was killed on a tree.

I’m looking forward to the rest of this book. I will get through it, slowly but surely.