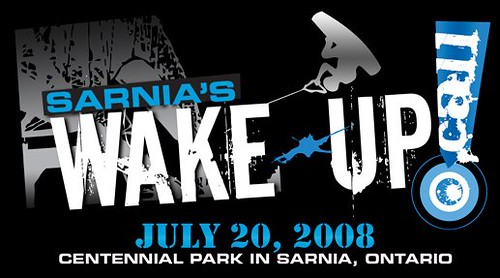 A friend of mine Chris is running Sarnia’s first ever Wakeboard competition and it will be professionals (invite only) and free admission on July 20th. It’s called Wake-Up Call. It should be awesome, and it’s about time someone did this in Sarnia, we are ripe for these kind of events. Below is the article in The Observer. Chris is the guy with the black wet suit on in these pictures.

Wake boarding comes to Sarnia this summer
By CATHY DOBSON

That’s what 24-year-old Chris Smith hopes to do when he hosts a wake boarding competition for the first time on Sarnia’s waterfront.

“I’m blown away by the reception I’ve received here,” Smith said. “Everyone wants this to happen.”

He’s spent three summers helping organize Rock the Wake in Haliburton. Now that he’s moved back to his hometown, he wants to introduce Sarnians to the sport.

He’s dubbed it “Sarnia’s Wake-Up Call” and is bringing in 12 professional wakeboarders and wakeskaters to demonstrate the sport and compete in the river at Centennial Park on Sunday, July 20.

Smith hopes to draw on two established events taking place in the park that day. Ribfest and Hobbyfest goers will be able to take in the wakeboard demonstrations free-of-charge.

“I hope that once Sarnians see what it’s all about and understand, we’ll be able to have a larger event in coming years and have amateur competitions too,” Smith said.

Wakeboarding attracts a younger crowd, said Mayor Mike Bradley. “It fits in well with our plan to create new events for young people.”

City council gave the event a boost Monday by providing Smith with $1,500 to cover the cost of insurance.

He has several sponsors lined up, including Precision Power Sports, and is working in partnership with the Holiday Inn, waterfront marinas, Sarnia Water Sports and SIGN Here.

As an added attraction, Smith is bringing in a 150-foot swimming pool to be assembled on the grass near McPherson Fountain.

The pros will not only demonstrate their flips and grabs behind a boat on the river, they’ll also use a winch in the pool to pull them along.

“If the weather is good, I should get 1,500 people or more,” Smith estimated.

A wakeskater himself, he said his passion for the sport is being met with a lot of encouragement.

Vicky Praill of the local Convention and Visitors Bureau said the combination of Ribfest, Hobbyfest and Sarnia’s Wake-Up Call should generate big crowds if the weather is good.

“I think it’s an amazing event,” she said. “We’ve tried in the past to bring wakeboarding to Sarnia and now here is one of our own doing it.”

Smith has set up a website at www.wakeupcallonline.net, which will soon have more detail about the event.