Rachel took me to Nuit Blanche in Toronto for my birthday this year, and it was pretty awesome.  It’s an all night arts festival in the heart of downtown Toronto with over 130 exhibits.  It was pretty wild and super well run.  Here are some of my pictures

Some of my favourite exhibits were:

Hey Dave –  Society’s constant shift toward the impersonal and hyper-technological has resulted in a generation of people more comfortable staring at a small-screen than having face to face communication.  Although the global community is valuable and cannot be ignored, it must not be dehumanized. We need to embrace our shrinking world community, while remembering to simply say hello to our neighbour.   Enter Dave. Dave is the king of the mingle, the ultimate acquaintance. Wherever he goes, someone stops him to say “Hey, Dave!”  Now anyone who wishes to participate can join Dave on a platform, thus taking real, physical steps to change the anonymous way of life made ubiquitous by our technological addiction.  Put down the BlackBerry, iPod or cell phone and climb the steps to say “Hey, Dave!”  It’s that simple.

The Apology Project –  For Nuit Blanche 2009, The Apology Project will be staged in its largest scale thus far. A cluster of 55 people wearing large brown paper bags on their bodies will congest a public hallway and personally apologize to every person who ventures through them. The uncanniness of this human blockade will disrupt the regular flow of traffic and provoke reflection about passive aggressive behavior. Who are these people? Why are they here? Why are they wearing brown paper bags over their bodies? There is an enigma about what precisely they are sorry for and why they are choosing to continue doing something that they find reproachable. If it is their awkward presence in the space that they are apologizing for, why do they chose to remain there? Why not just stop an offensive behavior rather than continue to indulge in it and apologize?  In the context of Nuit Blanche, endurance will become a significant component of the work as these people will be standing in brown paper bags and apologizing for 12 hours. Time will become a device that at once tests the physical limits of the performers and also testifies to their will to be obnoxious and continue to maintain a disruptive posture even though they are physically exhausted. 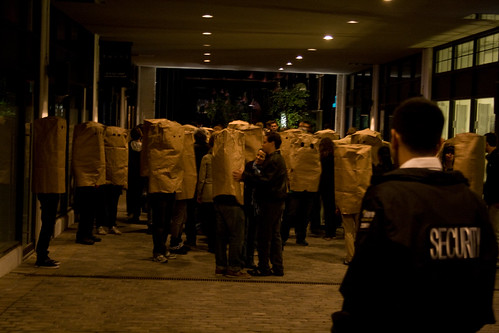 Surrounded in Tears –  The English Language has developed an extensive vocabulary to classify and understand the act of crying: weeping (associated with deep emotion) is very different to blubbering (colloquial, derogatory) or bawling (associated with children). Bypassing this mass of carefully nuanced and culturally specific linguistic signifiers, Colombian-Caribbean artist Oswaldo Maciá has turned to the semiotics of the raw material of crying itself.  In collaboration with composer Michael Nyman and designer Jasper Morrison, Maciá has created a sound installation compiled of one hundred individual cries. 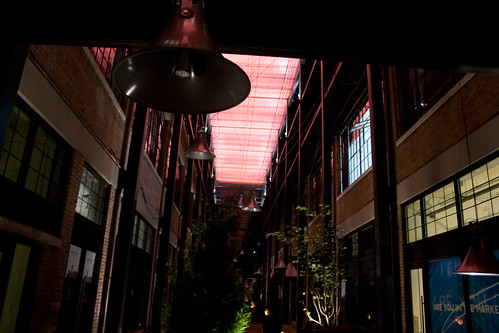 Nite Lite – NITE-LITE is a free-standing light installation which uses re-purposed materials and water bottles, stained and lit to act as ‘pixels’, which create visuals as well as awareness to the environmental issues surrounding plastics and BPA. Some ‘visual facts’ that will be shared by NITE-LITE are directly connected to the effects that water bottles are having on our environment, such as their lack of bio-degradability in landfills and the harmful BPA chemical that they release and its damaging effects. The images/messages are intended to be engaging and a starting point for dialogue. 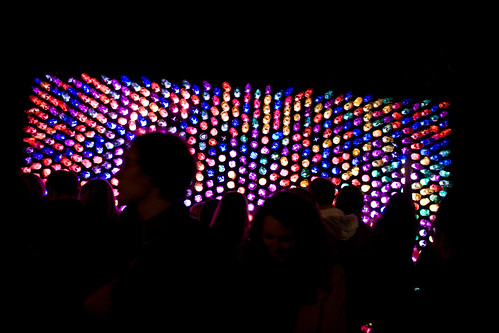