Here is the two videos we showed at the conference.
Here is a list of links of people who blogged about the day.

The Evolving Church: Restoring Justice is over and it was a great success. Instead of writing about the whole day, here is a few things that you might not have known.

– We are guessing there was about 760 people there throughout the day not including speakers for volunteers. While I’m not a numbers guy all that much, seeing The Meeting House that full of people passionate about social justice was an inspiration. We didn’t have the Meeting House booked until January and we were quite nervous we wouldn’t even get a venue. But we did and it was amazing. The Meeting house was the perfect venue for what we were trying to do. And it was 300 more people than last year.

– Oakville, where the Meeting House is located is one of the most expensive and wealthiest places in Toronto. I also heard a rumour that it is illegal to be homeless in Oakville. We took a lot of flack for this, but we thought what better place to do a social justice conference than in the middle of the wealthiest neighborhoods in Toronto.

– About 100 people registered at the door, every workshop was packed at least for one of the sessions as far as I could tell.

– We had to order 150 more conference guides and nametags two days before the conference because we were still selling so many tickets. Swordfish did all of our printing and audio recording for the day, and as always they blow we away with their professional job that they do. Swordfish has all main sessions and workshops recorded and are selling them now.

– We aren’t sure yet, but we are almost positive that we were able to build a water well because of this conference, more details to come.

– This conference went by 10 times smoother than last years. Because of our volunteer coordinators (Alicia and Nate), our past experience and the size of the venue we couldn’t have asked it to go better.

– We pick our speakers based on who inspires us and then hope that they inspire the people that come to the conference. Their books have all done something to our lives and have challenged us in ways to numerous to count and we hope they do the same to everyone who walks in those doors. So far so good.

– Our workshop leaders were just as amazing as our keynotes. We deliberately choose our workshop leaders and help people get connected with them because we believe that what they are doing is changing the world. A few of the favourites this year were David Fitch, Greg Paul and Dan Oudshoorn. Thank-you too all of them, you inspire us to live like Jesus more and more.

– Epiphaneia is pronounced Eh-piff-an-aya why we chose a word no one could pronounce is beyond us but it’s too late now.

– Joe Manafo was our MC for the day and he is one of the most clear and articulate communicators I know of. We could have asked anyone better to do the job. I have a lot to learn from them

– I did a radio interview throughout the day; I’ll link to it when it goes live

– I saw some highly influential Pentecostals there throughout the day which made me smile, like David Shepherd, Bill Morrow, Dave Slater so it was cool to see some high up people from my old denomination that would hopefully take some of these messages back to the rest of them.

– We sold t-shirts, Darryl designed them, they look good, if you want them send me $10 bucks and I’ll send you a t-shirt.

– We have hours and hours of video footage that if I ever get around to it we’ll post a small documentary on the day. Thanks to Chris Jardin for that.

– We had a group of volunteers come all the way up from Philadelphia. They were all amazing, super friendly. We put a number of volunteers in hotels for the night so we had a fun night and morning of continental breakfast and pre-meetings. You know those awkward meetings that no one wants to go to but its where you hear about where your getting your free t-shirt?

– We have I think some ideas for our best conference yet coming next year. I will say nothing to then, but two themes that we may be going with. Either the Kingdom of God or the Jewishness of Jesus.

– Darryl Dash blogged live throughout the conference. And then he posted all his notes online here.

– We walked around and gave five people their money back randomly and told them that we exceeded budget and that they should use it to bless someone. It was kind of releasing to do something like that. The looks on their faces were priceless.

– Our sound guy was the best sound/lights guy I’ve ever had. He was the man, doing four things at once and calmer than anything the whole time. If your ever doing anything where you need good quality and a great guy to do it James from the Meeting House. Our Janitor throughout the day was amazing as well, he helped us more than we could imagine by keeping things in order, showing us around and was even there with us till late at night the night before. Graham from the Meeting House, you were amazing.

– A number of people came up from Sarnia, it was awesome to have them all there. Thanks to Barry, John, Drew, Dave, Rita, Nora, Shane, Charity and Rachel for being there.

– You can keep updated on anything online about the Evolving Church conference at our website. www.epiphaneia.ca for links to people that blogged about it, media or anything else.

– If you have any ideas, comments or suggestions, shoot us an e-mail, they are all welcome. [email protected] 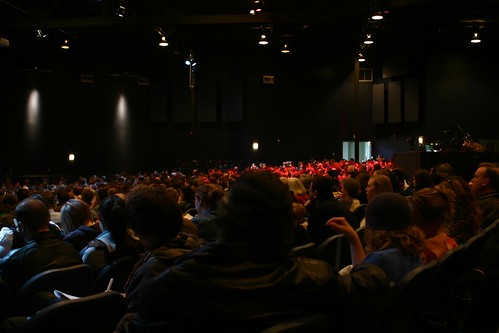 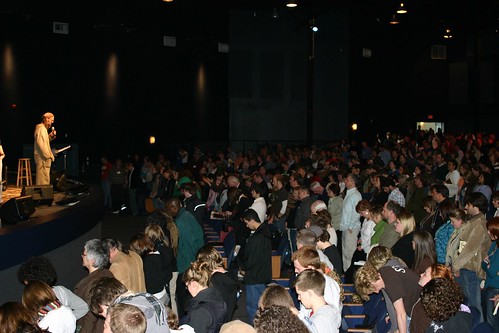 4 thoughts on “Overview of the Evolving Church Conference: Restoring Justice”