Thank-you for that picture selection.

ROCK, PAPER, SCISSORS EVENT TO BE HELD IN SARNIA AUG. 6 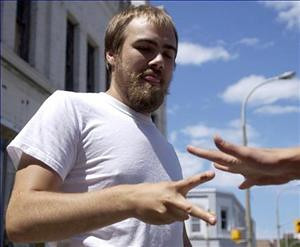 Look out baseball fans, there’s a new sport in town.

Sarnia’s first Rock, Paper, Scissors tournament is coming Aug. 6 and the buzz has would-be competitors engaging in a new form of hand-to-hand combat.

Without the benefit of previous tournaments, he rose from the bottom ranks to beat out 545 others at the Steam Whistle Brewery in Toronto.

“I’d never really heard of it before and I just kept winning. It’s the funniest thing I’ve ever seen.”

Before the night was through, Colquhoun had battled through match after match, making it to the top 16 and almost winning the $10,000 grand prize.

The experience convinced him that Rock, Paper, Scissors would go over well in his hometown, and he’s organized a tournament at Ups N Downs on Front Street.

It costs $20 to enter the tournament, or play at what’s called the street level for a minimum of $1.

There’s seating for only 128, so pre-registration is encouraged by calling Colquhoun at 519-704-1173 or visiting www.sarniarps.com.

Proceeds will support a group of four young adults, including Colquhoun, headed to Africa to administer home-based care and prepare students for college.

Colquhoun is a local pastor, his wife Rachel Colquhoun is an ICU nurse at Bluewater Health, Charity McNally is a Montessori school teacher and Shane Kerrigan is a teacher at Northern High School.

The four are going to Masoyi, South Africa and Swaziland to work with the locals for a month starting Aug. 10.

“I hope to raise a little bit toward the trip and I also want a rock, paper, scissors tournament to become annual in Sarnia,” Colquhoun said. “Eventually, I want to be able to send a winner from here to the World’s.”