Rachel and I bought an ebike at the beginning of last summer.  It was her idea to get it, but it basically ended up being mine because I used it as our second vehicle the last two summers.  It cost us $1200 after taxes. It has easily saved us at least that much in gas since we bought it. No insurance, no license, no gas…you really can’t go wrong. For a city like Sarnia, it is perfect. It only goes 32km/hr but really, it is fast enough to get me anywhere I need to be in the city. There was a three year pilot on ebikes and it is now over and the good news is we can still ride our bike just like we always have.  Here is an article in the Sarnia Observer posted below about it. 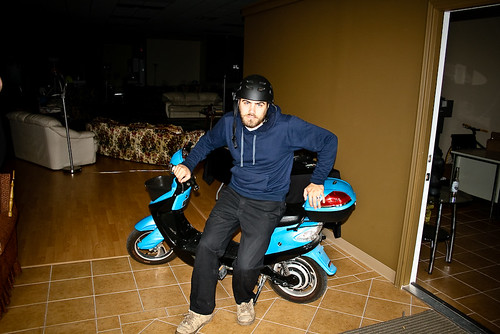 All revved up
Posted By TYLER KULA, THE OBSERVER

The road ahead just got a bit smoother for electric bike aficionados.

A three-year pilot ended Saturday with the Ministry of Transportation granting E-Bikes the same status as regular bicycles under the Highway Traffic Act, with a few exceptions.

E-Bike riders can go anywhere bicycles can, but riders must be 16 years or older, wear a helmet, and stay off of 400-series highways and other roads on which bicycles aren’t permitted.

E-Bikes vary in appearance from conventional bicycles to models that look like scooters and can travel up to 32 kilometers per hour.

They operate with conventional pedal power or a rechargeable electric fuel cell.

Some Sarnia residents have objected to scooter-like E-Bikes appearing on nature trails and Sarnia’s waterfront.

Mayor Mike Bradley said a report will come to council to clarify any local restrictions that might apply to E-Bikes.

“What I would think is whatever rules apply to bicycles would now apply to E-Bikes without qualification,” he said.

Bradley said electric bicycles have environmental benefits but he foresees an issue in the fact operators don’t require a “You can lose your licence for whatever reason and yet you can get on a semi-motorized vehicle the next day . . .,” Bradley said. “That’s an interesting twist.”

The ministry says E-Bikes must be able to stop within nine metres and weigh 120 kilograms or less.

No modifications are allowed to boost a bike’s speed beyond 32 kilometres per hour.

Jeff Lacroix, manager of the Sarnia E-Bikes store, was surprised by the weight restriction.

Lacroix operates the Mitton Street store with Mark Casey. They’ve sold more than 200 eBikes since it opened in June of 2008.

They’ve started a petition requesting more bike paths and lanes in Sarnia. The petition, which has about 300 signatures so far, will be presented to council in February or March.

“It’s the times,” Lacroix said. “You go anywhere else and they’ve got bike lanes.”